Cycle (B) 3rd Sunday of Easter 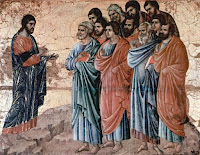 There is a beautiful story concerning the love of Paul Tournier, one of the world's most beloved and respected Christian doctors, for his wife Nelly. Nelly used to talk about death after her first serious bout with coronary thrombosis while they were in Greece. She knew how gravely ill she was and that a second attack could leave her severely handicapped or could even be fatal. On the last day she said to him, "Perhaps it would have been better if I had died of my heart attack a month ago." Tournier responded, "And yet my Greek colleagues have done a good job. They saved your life. You are glad of that." "Yes, of course, "she said, "If I can get back to Geneva and see my children and grandchildren." She was silent for a moment, and then added, "But if I had died, I should be in heaven now, and I should be meeting your parents." Tournier was touched by this. He replied to her, "Well, when you arrive in heaven, my parents will thank you for having been the wife that you have been for their son." It was to be Tournier's last words to her. A moment later she put her hand on her heart and exclaimed, "That's it!" He asked, "Are you sure?" She answered "Yes." And she was in heaven. (Paul Tournier, A LISTENING EAR (Minneapolis: Augsburg Publishing House, 1984).

The world simply cannot deal with that kind of expectations. Without the Easter faith not only death but life itself is ultimately meaningless. There is no value for life that ends beside a grave. The Gospel passage stresses the reality of the resurrection. The risen Lord was not a phantom or hallucination, but he became a reality experienced by his disciples. Our daily lives should be the means of experiencing and sharing the risen Lord with others. Just as the disciples experienced the risen Lord in their community we should be able to feel the presence of Jesus in our own homes, our parish and our community.

Often the reality is that our faith remains in words and does not penetrate into our lives. There is a story that well depicts our attitude. The priest ("poojary") of a small Hindu congregation in a tribal area in India was being proselytized by some energetic Christian missionaries. He listened for a while and then said to them: "Gentlemen, look. I have a proposal that will settle this. I have here a glass of nux vomica, a poison which I use to kill rats. If you drink this poison and remain alive as your God Jesus Christ promised, I will join your religion – and not only myself, but my entire Hindu congregation. But if you won't drink the poison, well, then, I can only conclude that you are false ministers of the gospel you preach because you do not trust that your Lord would not let you perish." This created a problem for the missionaries. They conferred with each other and said, "What on earth are we going to do?" Finally, they arrived at a plan of action. They came back, approached the Hindu priest and said, "Here is our plan. You drink the poison, and we'll raise you from the dead by the power of Jesus!"

The theme of today's readings is the challenge to adjust our lives in the living presence of the risen Lord. This awareness should strengthen our hope in his promises. That was the experience that the Apostles had in the upper room where they were gathered. This experience transformed the Apostles. They were no longer weak and timid men; but they became men of courage who declared the reality of the resurrection of Jesus through their preaching and healing ministry.

Secondly, today's readings emphasize the fact that the way to know God is to keep his commandments. Hence, Jesus wanted his disciples to go out into the world with the offer of forgiveness. Accepting the command of Jesus they reached the ends of the then known world. Today, Jesus needs us as witnesses to continue his mission. Jesus needs Spirit-filled followers to be his eyes, ears and hands and to bear witness to his love, mercy and forgiveness. The church badly needs dedicated witnesses. The essence of bearing witness is to testify by our lives that the power of the risen Jesus has touched and transformed us. In other words, Jesus is to speak to other people through us. In Calcutta, a dying old woman with her head in the lap of Mother Teresa, looked at her, and, in a feeble voice, asked: "Are you the God Jesus who loves the poor and the sick"?

This is the message the church places before us today. Let us be the ambassadors of God Mercy and forgiveness. Amen.