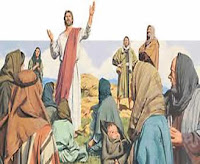 Jesus fed the people with the loaves of bread and fish he had miraculously multiplied. The next morning, it did not take long for the crowd to realize that Jesus had disappeared. As such, they set out to Capernaum where Jesus and His disciples were known to resort. When they found Jesus on the other side of the sea, they said to Him, "Rabbi, when did you come here?"

But Jesus' response to their question was different. Jesus said, "Very truly, I tell you, you are looking for me, not because you saw signs, but because you ate your fill of the loaves." Jesus knew that the people had not perceived the true meaning of the signs. The people had only considered the material aspect of the miracle, having failed to reflect on its significance. Jesus continued, "Do not work for the food that perishes, but for the food that endures for eternal life, which the Son of Man will give you." This echoes the words that are found in the Book of Isaiah in the Old Testament. "Why do you spend your money for that which is not bread and your labour for that which does not satisfy? Listen carefully to me, and eat what is good, and delight yourselves in rich food. Incline your ear, and come to me; listen, so that you may live. I will make with you an everlasting covenant..." [Is. 55:2-3] The Jewish people were very familiar with these words. Yet, the difficulty that Jesus was experiencing was the worldly mindedness of the people. While Jesus spoke of spiritual food that will not perish, the people asked what they must do to perform the works of God. Obviously, they were not tuned in. They were spiritually blind. They were very worldly minded, lacking spiritual mindedness.

Material things do not necessarily bring you happiness. That is a fact of life. It is a hard fact to understand sometimes, especially in a society that tries very hard to teach you otherwise.

Buddhism is a religion based on seeking enlightenment, and not desiring material or tangible things. They believe that suffering is caused by desire. The principle is, we desire, we suffer because we do not own the thing we desire, and once we own the thing, we desire something else, so the suffering continues. There are too many desires in the world, and a human will never be truly happy.

It is very common to get into a mode where you think, "If only I had object X, my life would be perfect and I would be happy." You really want something: a new TV, a new car, a special pair of shoes, whatever. Then you buy it and you love having it for a few days. But over time you get bored or it wears out. You can see this pattern repeated constantly in your own life. For example, your parents and grandparents likely spent thousands and thousands of dollars on toys for you as you were growing up: Dump trucks and Barbie dolls and video games and electric cars and on and on and on. All of those toys got boring or broken or outgrown eventually. They brought happiness for a moment or a week, but over time they became worthless and your desire turned to a new object.

Christianity isn't centred around not wanting possessions; however they believe that we are all a possession of god. In Acts, 4, the bible states clearly that "neither said any of them that ought of the things which he possessed was his own; but they had all things common" Therefore Christian view shows that all humans are equal, and no matter what we own, God sees us the same.

This kind of behaviour isn't only seen in humans. Two dogs might be eating out of their bowls, and one of them goes to eat out of the other bowl, simply because they have a default assumption that everyone else is getting the "better deal".

Jesus was asking His listeners to change their hearts and minds in order to see God in a new light. Instead of asking for bread for their stomachs as their ancestors did when Moses led them out of Egypt they should ask for the Bread of Life, the Bread Jesus was going to give them, His Body and Blood.