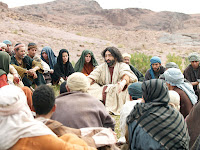 In today's first reading we see the challenge that Joshua set before his people. He assembled all the people at Shechem and threw a challenge before them: to follow Yahweh or to choose the gods they liked. Shechem has been a holy place for the Israelites since ancient times. It was at Shechem that God had appeared to Abraham and promised him that one day, that land would belong to his descendants. It was at Shechem that Jacob bought a piece of land, erected an altar and ordered Rachel and all his family to bury the idols they had brought with them. It was at Shechem that the bones of Joseph, brought from Egypt, were buried. This was the very same place that Joshua chose to challenge the Israelites to be faithful to Yahweh.

In today's Gospel we see the challenge that Jesus places before the people who gathered to listen to him. After listening to the teachings of Jesus many of them remarked, "This is intolerable language. How could anyone accept it?"

Jesus' claims gave rise to different reactions. Most of them left Jesus, as they couldn't understand his teachings. Then Jesus raised the challenge to his disciples: “Do you also want to go away?"

In these circumstances there were three different attitudes to Jesus.

It is high time that we also reflected to find out where we stand, as his followers. Majority of us identify ourselves with the vast crowd that were not able to accept the challenges that Jesus placed before them. Like them we also disappear from the scene. We silently assent to the decisions and practices of the majority, even if there is a constant reminder from our conscience that what we do is not correct. Silently consent the injustice, exploitation and human right violations. Because, we do not want to risk our name; we do not want to risk our positions; we do not want to risk the comforts that we enjoy. Jesus was ready to risk everything. He could have lived a peaceful life as a carpenter well accepted in Nazareth. He could have enjoyed the admiration of the crowd as a miracle worker. He could have been recognized as a healer; but Jesus went beyond. He was ready to risk all the comforts and stand for the cause he came to establish.

Nothing has been achieved by anyone without taking risk. Gandhiji had to risk the comforts of a peaceful home and face the violence of the British. Martin Luther King had to risk the comforts a quiet but their willingness to accept risk brought great comfort to the mankind. Today Jesus places the challenge before us: Are we ready to accept the challenge or do we want to drift away for our own reasons?

Another reaction was that there was deterioration. There is a terrible story about an artist who was painting the Last Supper. It was a great picture and it took him many years. As model for the face of Jesus he used a young man with a face of transcendent loveliness and purity. Most of the figures were completed. Now one more figure was left to be completed. That was of Judas. He went out and searched in the lowest haunts of the city and in the dens of vice. At last he found a man with a face so depraved and vicious as matched his requirement. When the sittings were at an end the man said to the artist: "you painted me before." "Surely not," said the artist. "O Yes," said the man, "I sat for your Christ."

Years had brought terrible deterioration in him. We find that Judas who could have become a hero became a villain; he who might have become a saint became a name of shame for centuries. The years can be cruel. They can take away our ideals and our enthusiasm. They can deprive us of our dreams and aspirations. Therefore, we have examined ourselves constantly to see where we stand.

Another reaction was that there was determination. When Jesus challenged his followers, Peter's determination was expressed. He responded, "Lord who shall we go to? You have the words of eternal life." Peter's loyalty was based on a personal relationship to Jesus. There were many things that he did not understand. But there was something in Jesus that held him fast to Jesus, that was his experience of Jesus. In the last analysis Christianity is not a well set doctrine of dogmas, not a credible philosophy, not a well-defined Christology, but simply a personal relationship with Jesus. Whoever has brought Jesus into their lives did wonders. With Jesus they became Heroes. When we too are able to have this personal experience, we will become heroes of Jesus.