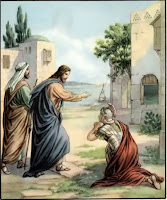 We are all familiar with the term identity crisis. It is a modern phenomenon that man tries to find his own identity. Many today ask the question who they are?

In today's Gospel Jesus confronts his disciples with a very difficult question. The opinion of people about him, and their personal opinion about him. It is of the most dramatic interest to see where Jesus chose to ask this question. There was no district that had so much religious association like that of Caesarea Philippi. Caesarea Philippi had many temples of ancient Syrian gods. Caesarea Philippi was considered to be the birth place of the Syrian god Pan. Caesarea Philippi was considered to be the source of Jordan. In Caesarea Philippi there was the great temple of white marble built to the godhead of Caesar.  Against this background of the world's religions in their history and their splendour, there stood a homeless, penniless Galilean carpenter, with twelve very ordinary men around him. It was the time the orthodox were actually plotting to destroy him as a dangerous heretic. He stood in that area littered with the temples of the Syrian gods; in a place where the history of Israel crowded in upon the minds of men; where the white marble splendour of the home of Caesar-worship dominated the landscape.

There stood this amazing carpenter and demanded a verdict from his disciples. He asked them what people were saying about him, and who they took him to be.

Some thought that he was Elijah. Some thought he was Jeremiah. Some thought that he was John the Baptist. Some thought that he was one of the great Prophets. For the people he was a healer, a miracle worker, a compassionate teacher, and a person who was able to feed them. When the people identified Jesus with Elijah and Jeremiah they were paying him a great compliment and setting him in a high place. Then came the most important question, "Who do you say I am?" With this question Jesus reminds us that our knowledge of Jesus must never be at second hand. A man might know every verdict ever passed on Jesus; he might know all the Christology; he might know every teaching about Jesus; he might by-heart every commentary on the teaching of Jesus; he might analyze the historical back ground of every utterance of Jesus. But Christianity never consists in knowing about Jesus; it always consists in knowing Jesus. Jesus demands a personal verdict from every Christian.

When this question was addressed to Peter, his answer was, "You are the Christ, the Son of the living God." We do not know what was the idea of Peter about Jesus. He might have conceived Jesus as the son of God who came to abolish the rule of the Roman Empire and restore the Kingdom. Or he might have conceived him as spiritual reformer; but the experience of Peter made him a different man. On the day of Pentecost, these ignorant fishermen addressed multitudes who spoke different languages, but they heard him in their language. He stood before the rulers and authorities and declared his loyalty to his master; he accepted imprisonment for the sake of his master; and finally he embraced death on the cross.

For the last 20 centuries this question has been repeatedly addressed to a number of Christians; and their lives depended on the answer they found for this question. During the first three centuries, the Church boasts about eleven million martyrs who fertilized the tree of faith with their blood. The martyrs are the most intriguing and most beloved saints of Christianity. Our most popular and beloved saints, with innumerable churches dedicated to their names, are those who died for the faith, like St. George, St. Sebastian, St. Stephen, St. Catherine, St. Barbara, and the forty martyrs of Sevastia.

Neomartyr Michael Paknanas was less than twenty years old, and he worked as a gardener in Athens in the 1800s. The Turks, who enslaved Greece at the time, were trying to convince him to give up his faith. When flattery and wealth failed to persuade him, they put to use some of their more convincing standard missionary work by torturing the teenager. When all the tortures proved to be futile, the executioner was preparing to behead the young man, but at the same time he was feeling some compassion for him. So he began cutting his neck slowly with the sword by administering very light blows, while asking the martyr to reconsider. The martyr's response? "I told you, I am a Christian. I refuse to give up my faith." The ax-man struck with another light blow to make some more blood flow, to possibly convince him. The martyr repeated, "I told you, I am a Christian. Strike with all your might, for the faith of Christ." This totally aggravated the executioner. He did exactly that, and St. Michael was sent to the heavenly mansions.

These are the people who understood who Jesus is? And what is his place in their lives? The four Gospels are filled with demands straight from the mouth of Jesus Christ. These demands are Jesus' way of showing us who he is and what he expects of us. He expects an answer from each one of us, "Who is Jesus for us?"

There is a beautiful story about pencil. The pencil maker took the pencil aside, just before putting it into the box.

"There are 5 things you need to know," he told the pencil, before I send you out into the world. Always remember them and never forget, and you will become the best pencil you can be."

"One: You will be able to do many great things, but only if you allow yourself to be held in someone's hand."

"Two: You will experience a painful sharpening from time to time, but you'll need it to become a better pencil."

"Three: You will be able to correct any mistakes you might make."

"Four: The most important part of you will always be what's inside."

"And Five: On every surface you are used on, you must leave your mark. No matter what the condition, you must continue to write."

The same applies to each one of us too. When we find an answer to Jesus' question who he is for us, we will be able to make ourselves useful to our contemporaries. We have to undergo the process that the pencil undergoes.

One: We will be able to do many great things, but only if we allow ourselves to be held in God's hand. And allow other human beings to access us for the many gifts we possess.

Two: We will experience a painful sharpening from time to time, by going through various problems in life, but we'll need it to become a stronger person.

Three: We will be able to correct any mistakes we might make.

Four: The most important part of us will always be what's on the inside.

And Five: On every surface we walk through, we must leave our mark. No matter what the situation, we must continue to do our duties to the best of our abilities.

May God help us in our endeavours.