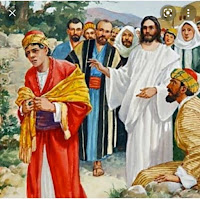 There is an old story about an 18th century man who was moving overseas. His life's savings of gold and silver coins were carried in a big money belt he wore around his waist. The ship hit an iceberg and started to go down. It was sinking so fast that many people had to jump in the water and swim to the lifeboats already launched. The man jumped in, but because he could not bear the thought of leaving that heavy money belt behind, he went to the bottom of the sea.

Jesus tells the story of such a man in today's gospel. The young man was attracted by Jesus. He was good, frank and God fearing. Mark says that "Jesus looked steadily at him and loved him." Jesus invited him to leave behind all riches, and he promised him a far more precious treasure in exchange. But, reluctant to renounce his wealth the man did not accept the invitation of Jesus.

their wealth got buried with history.

When God called Moses there were two options open before him. One: live silently ignoring the invitation of God, and become the next pharaoh. The second:  leave his possessions and political power to pursue the ways of God. Moses chose the second and he became one of the greatest pillars in the history of Salvation. He is remembered throughout history. That is the reward that he received in exchange for his sacrifice.

Jesus called his disciples. Whoever was ready to accept that invitation became pillars of his church. They became part of history. Whoever rejected the invitation of Jesus became forgotten with history. The Gospel never again speaks of the young man. His riches proved detrimental for his greatness.

In history we see many people who used their wealth as means to glorifying god.

Joseph Leek left nearly $1.8 million to an organization that provides guide dogs for the blind, and nobody, not even his own family, had any idea that he had that kind of money. The 90-year-old Britisher lived like a pauper. He watched television at a neighbour’s house to save on electricity, put off home repairs, and bought second-hand clothes.

Rev. Vertrue Sharp raised hay and cattle, preached and taught, while saving every penny he made. When he died in 1999, he left an estate of $2 million to the East Tennessee Children's Hospital, the University of Tennessee Medical Center, and other charities.

English spinster, Mary Guthrie Essame was a retired nurse who lived in an old Victorian house and who clad herself in such worn clothes and old shoes that no one knew how well off she was. Neighbours were shocked to learn that her estate amounted to a whopping $10 million when she died in January 2002. (The money was left to a host of charities.)

Benjamin Guggenheim, born in Philadelphia, Pennsylvania, was an heir in the wealthy Guggenheim family. He took up the family mining business, gaining the nickname "Silver Prince". Following a trip to Europe, he decided to sail on the maiden voyage of the Titanic. Late on the night of April 14, the Titanic struck an iceberg and began to sink. Guggenheim and his secretary dressed in their finest evening clothes and assisted women and children with getting on the lifeboats. He told a crew member that "we've dressed up in our best and are prepared to go down like gentlemen." Guggenheim asked a crew member to deliver a message to his wife Florette. "If anything should happen to me, tell my wife in New York that I've done my best in doing my duty."

Jesus' challenge to the young man exposed two missing pieces in the rich man's life: a sense of compassion for the poor and the willingness to share his blessings with the needy. Jesus declared that true religion consisted in sharing one's blessings with others rather than hoarding them and getting inordinately attached to them. Jesus' teaching exposes the shallowness of our own easy assumptions about wealth and raises questions about the real basis of our security and hopes.

Jesus thus makes it clear that a true follower who wants to possess eternal life must not only be a respectable gentleman who hurts nobody, but also someone who shares his riches, talents and other blessings with the less fortunate. He makes the same challenge to each of us today. Our following of Jesus has to be totally and absolutely unconditional. Our attachment may be to money, material goods, to another person, a job, our health, or our reputation. We must be ready to cut off any such attachment in order to become true Christian disciples, sharing our blessings with others.

We all may be good people, like the young man, keeping the commandments and obeying the precepts of God. But we all have something in our lives that serves as a major obstacle to happiness and peace. We must recognize this obstacle. It may not be riches - it may be anger, holding grudges, alcohol, lust, apathy, lies or unfaithfulness. Let us invite God into our lives and ask him to help us to remove that one obstacle to holiness. We have a decision to make not to go away sad, like the young man, but to accept the challenge Jesus throws before us.