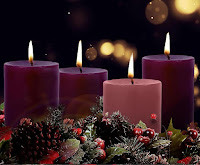 Today's First Reading from the Book of Micah announced the arrival of the promised Messiah. And he is the symbol of peace.  When Jesus was born the first message the angels announced was “peace on earth”. Ever since man estranged himself from God, he lost his peace - Peace within himself, Peace with the nature and peace with God. And man’s search for peace continues through out ages.

One day some people asked a very powerful wizard how to stop all wars and bloodshed on the planet and establish peace.

– It is simple, – he said. — I will destroy all weapons on the Earth, and nobody will be able to fight anymore.

– It would be great! –people exclaimed.

The magic wand’s wave – and this was done.

There was peace on the planet for a few days, while the majority of those who were prone to fight, sought and could not find a weapon. When they understood they lost it forever, they made spears from tree branches and started to fight again.

When the wizard heard this bad news, he said:

– Do not worry. I will destroy all small trees, so that they will not be able to fight.

After a few days of futile search for small trees, suitable for making spears, rebellious people started to cut giant trees, make batons from them, and the bloodshed started again. The Wizard destroyed all big trees. Then People made sling and began to throw stones at each other. It was necessary to destroy the stones, too. And then peace seekers began to worry: all trees disappeared; there was no metal and stone. How to live, what to eat now? There would be no vegetation soon, and people disappear from earth soon. No, this is not the right solution.

– I do not know how to find a solution. I would have destroyed all humanity, but, unfortunately, it is not in my power!

The peace seekers fell into despair; they did not know what to do. And then one clever kid turned to the Wizard.

All people were inspired with the greatness of the kid’s thought.

We all ask for peace in far away lands, but at the same time, more often than not, we don’t have peace at home. Peace is a state of mind, and there is no point asking for peace in the world if, at the same time, we are constantly in a war mind state with one another: we give strangers a bad look, we ignore other human beings around us, we argue with strangers while driving and sometimes physical fights break out for the most trivial things.  We have to make peace within ourselves first. Then within our family. Peace with our neighbors and peace with the strangers we encounter outside.

Peace does not mean to be in a place where there is no noise or trouble. Peace means to be in the midst of all the chaos and still be calm in the heart. The real peace is the state of mind, not the state of the surroundings. It comes from a mindset that is ready to accept others and serve others.

Gospels present Mary as the perfect example of this. "Mary set out and went with haste to a Judean town in the hill country to visit Elizabeth” When Elizabeth heard Mary's greeting, the child leaped in her womb and she cried out, “blessed are you among women.”

Mary was an instrument to bring the prince of peace into this world. Today the same mission is given to each one of us. To be an instrument of peace. There are hundreds of men who stood for peace. The world recognizes them as blessed men and women.

Making someone else feel good is more rewarding and longer-lasting than anything else. So building up a reserve of happiness through acts of service could increase our inner peace. And that will be our best preparation to welcome the Prince of Peace.