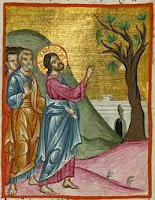 As we enter the Third Week of Lent, we continue on our journey of repentance in preparation for the approach of the Feast of Easter. Knowing that Jesus triumphed over the temptations in the desert, we are reminded that we too can triumph through our living faith in Jesus Christ.

During today's First Reading from the Book of Exodus, we heard that God observed the misery of His people. He heard their cries on account of their taskmasters.  And so He went to deliver them from the Egyptians.

During today's reading of the Gospel, Jesus addressed the nature of sin. When some of those present told Jesus about

the Galileans whose blood Pilate had mingled with their sacrifices he asked, "Do you think that because these Galileans suffered in this way, they were worse sinners than all other Galileans?" Or those eighteen who were killed when the tower of Siloam fell on them - do you think that they were worse offenders than all the others living in Jerusalem?" He said, "No, I tell you; but unless you repent, you will all perish just as they did."

A sin is a transgression against God. To sin is to offend God, to reject His holy ways. To explain the nature of sin Jesus gave a parable about the fig tree. Here Jesus   pointed out the sin of indifference, the sin of neglect of one's responsibilities towards God.

In the parable that Jesus told, a man had a fig tree planted in his vineyard. When the man went to look at it for a fruit, he found none on it. The tree had now been without fruit for three consecutive years. Finally, tired of that useless tree, the man told the gardener to cut it down. Upon hearing this, the gardener asked the owner to patiently wait another year during which time he would dig around the tree and put manure on it in the hope that it would bear fruit. If that helps after one year and there are fruits on it, good; if not, then it should be cut down.

The short story “Sin of Omission” by Ana Maria Matute speaks about the sin of not doing what we are supposed to do. The story is of a young orphan taken under wing by his uncaring uncle who makes him work as a shepherd. Over the years Lope becomes no more than a slave and a beast of burden to his uncle. Upon realizing this, he murders his uncle and is lead off to jail while the villagers rant of how ungrateful Lope was to his uncle for giving him work.

Matute asks, are the consequences of damning a child’s progress worse than death? The resounding answers she cries, is yes! Stunting the progress of a child is worse than letting them die because stunting their progress makes them subhuman, it destroys their humanity.

She shows Lope as an intelligent child who could have easily become successful in life had he only had the chance. While starting off bright, he becomes no more than a slave for his uncle, calloused and hardened. Matute shows that Lope could have been successful, juxtaposing his roughness a less intelligent school friend who is now becoming a successful lawyer. Obviously if his not so bright friend could be successful Lope would have done better if his uncle had given him a chance.

We are sent to this world with a mission. It requires great courage to accept the mission and work towards it. Moses was leading a peaceful life of a shepherd. God called him from there and sent to his people with a mission - to redeem God’s people. From a peaceful life he was thrown to a life of struggle. God called Jonah to preach to the people of Ninevah, the capital city of Assyria. But Jonah ran away from the Lord and headed for Tarshish. Gideon was called to deliver the Israelites from bondage to their Midianite overlords. But he was reluctant.

We have a mission to complete. It might be small or big. Like the example of the fig tree, we cannot be indifferent to it. The season of lent reminds of our mission to the messenger of Jesus.