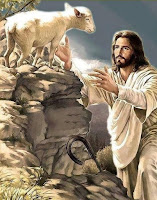 In today's Gospel Reading Jesus was speaking of His Divine title as the Good Shepherd.

To illustrate his relationship with his people, God chose the image of a shepherd and his sheep.  Scripture even refers to God as a "shepherd". Shepherds are mentioned dozens of times throughout the Bible, from the first book, Genesis, to the last, Revelation.  Great men such as Abraham, Moses, and King David were shepherds. The psalmist David beautifully expressed the responsibilities and concerns of a good shepherd. These shepherd images helped the Israelites understand their relationship to God and their dependence on him.

The shepherd and the sheep knew each other well. Sheep followed only the shepherd they recognized, ignoring all strangers. A simple call from their shepherd was sufficient for an entire flock to follow his lead. The shepherd scouted for new green pastures, quiet water, and danger. The shepherd faced the ongoing challenge and good shepherds took tender care of the animals in their charge.

When Jesus compared himself to shepherd the contemporaries of Jesus were able to understand him very well.

An Alpine shepherd has given a fascinating insight into his life, which involves fighting wolves and trying to protect his flock from danger on a daily basis.

Gaetan Meme looks after 1,300 vulnerable animals on the French Alps.

The 24-year-old sleeps fully dressed, dreading a midnight wolf attack on the flock of sheep penned in close by his hut, high up in the French Alps.

Once his sheep was attached by wild animals. He said, 'When my first sheep was killed I immediately felt that I had failed, that I had not carried out my duty.

From the start of his first season, the 24-year-old shepherd found himself face to face with the wolf, trying to fight it off.

To beat the wolves, you have to throw them off the track, he says. Move the penned area, make plenty of noise, light a fire, make scarecrows - all can help.

Meme looks over a flock of sheep as the weather turns stormy. He says he has sleepless nights worrying about predators attacking his precious animals.

They sometimes risk their lives to protect their cattle against large predators, like lions and hyenas.

Jesus showed all the qualities of a good shepherd. Jesus showed his love for us by leaving heaven, entering humanity, living a perfect life, and paying the price for our sins by dying on the cross.  He rose again, ascended to heaven to be with his Father, and intercedes on our behalf so that we can enter into relationship with God. Jesus rescued us and lay down his life for us, his sheep.

For the last 21 centuries there had been many who took inspiration from Jesus and followed his footsteps.

In August 2018, a passenger boat carrying 24 people slammed into an object in the waterways of Rivers State, Nigeria. The boat capsized, throwing its occupants overboard. Without hesitation, Joseph Blankson dove into the waters. As soon as the 36-year-old had rescued one person, he would go back to save another. One by one, Blankson pulled 13 people to safety. Sadly, while attempting to rescue a 14th soul, he succumbed to fatigue and drowned. Joseph’s incredible sacrifice meant that he was the only fatality that day.

Jesus wants us to follow his footsteps and be a consoling hand to our brothers and sisters in times of their need.