Cycle [C] The Body and Blood of Christ 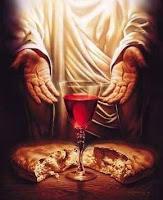 Today, we are celebrating the Feast of the Body and Blood of Christ. It is a Feast in remembrance of Jesus' command to us to celebrate the Sacrament of the Holy Eucharist.

Today’s Gospel says that Jesus spoke to the crowds about the Kingdom of God and healed those who needed to be cured.

As the day was drawing to a close, and the twelve came to him and said, 'Send the crowd away, so that they may go into the surrounding villages and countryside, to lodge and get provisions; for we are here in a deserted place.'

But Jesus said to them, 'You give them something to eat.'

When Jesus saw that the people were hungry, he fed them. And finally he instituted the Sacrament of Holy Eucharist to nourish the spiritual life of his followers.

During His ministry on earth, Jesus said, "I am the living bread that came down from Heaven. Whoever eats of this bread will live forever; and the bread that I will give for the life of the world is my flesh." [Jn. 6:51]

The Sacrament of the Holy Eucharist is the continuation of Jesus physical presence in the world.

Creating monuments and memorials have been a practice from the ancient times. Pyramids today stand as a reminder of the ancient Egyptian glorification of life after death, and in fact, the pyramids were built as monuments to house the tombs of the pharaohs.

Jewish Museum Berlin integrates the meaning of the Holocaust into the consciousness of the city, physically and spiritually.

Hiroshima Peace Memorial, also known as the Genbaku Dome or the Atomic Bomb Dome, was once the atrium of the Hiroshima Prefectural Industrial Promotion Hall. It was the only structure left standing in the area after the first atomic bomb exploded in 1945. It has been preserved in its post-explosion state and sits in Peace Memorial Park, alongside other monuments, including the Cenotaph for Atomic Bomb Victims.

Statues are erected and memorial places have been set apart to remember but as the politics and values of a nation change, so will its monuments. Public statutes falling everywhere. Robert E. Lee, Christopher Columbus, Thomas Jefferson, and more—memorialized leaders yanked to the ground. Nut the memorial Jesus left behind him stands even three thousand years after his death as his Living symbol on the Earth.

Pope Benedict XVI once pointed out “Today, there is a need to rediscover that Jesus Christ is not just a private conviction or an abstract idea, but a real person, whose becoming part of human history is capable of renewing the life of every man and woman. Hence, the Eucharist, as the source and summit of the Church’s life and mission, must be translated into spirituality, into a life lived ‘according to the Spirit’”.

A hymn human being is a beautiful part of God’s creation who starts compromising at a very tender age. You have sacrificed your chocolates for your sister. You have sacrificed your dreams for just a smile on your parents’ face. You spend your entire pocket money on buying gifts for a loved one. You sacrifice you youth for your wife or husband & children.  Your life finally ends up only by compromising for others’ happiness.

This is what Christian life is. This is the transformation that takes place in every Christian who shares in the Eucharistic meal.