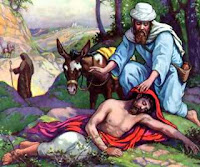 The Parable of the Good Samaritan has become one of the most famous stories among all of Jesus’ teachings. And it is one of the most beloved gospel stories. The story is told in Luke 10:29–37: A man going from Jerusalem to Jericho is attacked by robbers who strip him and beat him. A priest and a Levite pass by without helping him. But a Samaritan stops and cares for him, taking him to an inn where the Samaritan pays for his care. What makes this story very compelling is that Jews and Samaritans were historical enemies. Jews didn’t talk to Samaritans as they considered them renegades. And this enmity was returned by the Samaritans.

In this story the Samaritan provides an example of risk-taking love, and those who love Jesus are to follow that example. The Samaritan treated the stranger’s wounds. He poured out expensive oil and the wine that would have quenched his thirst. He tore his clean and costly cloth to bind the bleeding man. Then he hoisted this dirty, bloodied stranger onto his donkey. He did not think of his position or the responsibilities he had. The Samaritan likely had things to

do and places to be. He had a life and obligations. He might have been inconvenienced to help the hurt man, but he wasn’t deterred. He put his life aside for the moment and did what was required to make sure the man got the help he needed. He did not preach compassion to the innkeeper or expected any return for payment from the beaten man. The Samaritan took responsibility financially and personally and lived out a belief.

Pope Benedict XVI said. “The relevance of the parable today is evident. Aren’t we surrounded by people who have been robbed and battered? The victims of drugs, of human trafficking, inwardly devastated people who sit empty in the midst of material abundance. All this is of concern to us; it calls us to have the eye and the heart of a neighbor, and to have the courage to love our neighbor.”

This story places before us many lessons. The first lesson is When God calls we have to listen and act. In the Bible we see all the people who received God’s call and acted immediately. When Abraham received the call he abandoned his country and his people to follow God. When Moses received the call of God he left everything and followed. When Elisha was called by Elijah, he sacrificed his oxen, left everything behind and followed Elijah. When Peter was called he left his fishing equipment behind and followed Jesus. This is what the good Samaritan did. He accepted the opportunity that God placed before him. But there were also many people who put their responsibilities as an excuse not to accept God’s call. When Jesus called the young man he said, “Lord, first let me go and bury my father.”

The priest and Levite put their circumstance in their path and refused to accept the call of God. But the Samaritan did what his duty demanded.  Often we too allow our obligations and worldly wishes get in the way of loving our neighbors as Jesus asked of us.

The second lesson the parable gives is to help without expecting anything in return. There was no obvious benefit for the Samaritan to help the fallen man. The Samaritan knew that the wounded man might never see him again. Yet, he pressed on because he knew it’s the right thing to do. Being a Good Samaritan in the modern-day context is hard. Most of the time, we are so wrapped up in our own lives that we forget about our less fortunate brethren. But you can still fix that when we start with little acts of kindness. Think less about what others can do for us and more on what we can do for them. That, in itself, is already being a good Samaritan.

91 year old and blind Mavis  sat in her comfortable rocking chair as she listened to the evening news. Toward the end of the news she heard the reporter mention that in South America many newborns were being sent home wrapped in newspaper.

So Mavis went to her sewing room and went to work. Over the next few weeks she made more than 200 quilts and receiving blankets. As she finished each blanket, she gave it an affectionate hug before placing it in one of the boxes to be taken to the Church’s Humanitarian Services Center.

Mavis was an amazing individual. She said, “There is something I can do,” and she wanted to exert herself to make a difference to the newborns around the world.

Elder H. Burke Peterson stated: “In the day-to-day process of living, with all of its trials, challenges, and discouragements, we often underestimate our own God-given attributes and abilities which make it possible for each of us to pattern his or her life after that of the Savior and, in fact, do some of the things he did as he lived here among men. We may never personally experience the miracle of raising the dead, or be one to turn water into wine. We may not be one of thousands who may be fed from a few loaves and fishes or be a part of the miraculous experience of walking on a stormy sea. But, for each one of us, there are a number of Christlike patterns of living we can be a part of in our mortal sojourn.”

As he described: “A selfless person is one who is more concerned about the happiness and well-being of another than about his or her own convenience or comfort, one who is willing to serve another when it is neither sought for nor appreciated, or one who is willing to serve even those whom he or she dislikes. A selfless person displays a willingness to sacrifice, a willingness to [put aside] personal wants, and needs, and feelings.”

The third lesson is to provide whatever little we can to help the people in need. The Samaritan, certainly, was a true neighbor to that injured man. We cannot ignore the role played by the innkeeper. He took it upon himself to spend many days caring for him until his wounds healed. He prepared meals for him. He helped him to recover his strength. He served the injured man quietly, without drawing attention to himself. As Pope Francis said: “Love, after all, can never be just an abstraction. By its very nature, it indicates something concrete: intentions, attitudes, and behaviors that are shown in daily living.”

In July 2016, West Yorkshire Police received a call from staff at Sainsbury’s in Huddersfield. An elderly lady had gone into the supermarket and chosen some shopping and flowers – but, suffering from dementia, she became confused and distressed about what to do next.

According to a Facebook post from West Yorkshire Police’s Kirklees Rural branch, Sainsbury’s staff let the lady take her shopping home for free. ‘PC Dave’ then drove her home, holding her hand all the way to reassure her.

“Once the lady was home, PC Dave got her settled, put her flowers on display in the window, and put her shopping away,” said Kirklees Rural police. “All in a day’s work!”

A new mum in Australia who had been in hospital with her sick baby shared the details of a touching act of kindness from a stranger.

The anonymous woman had been staying at the hospital in Canberra with her nine-week-old son. Upon being discharged, she returned to her car only to discover that she had been issued a parking ticket.

In a post on Facebook, the mother wrote: “After those days in hospital, a parking ticket was one more thing that I didn't need. Well to my surprise, when I opened the envelope there was a note from a lovely lady named Laura.”

Laura’s note read: “I saw your car had a parking ticket on it, I'm sure whatever you were going through at hospital is tough enough so I have paid for you… Hope things get better!”

“I hope that Laura sees this and knows how much I appreciate her support,” wrote the mother. “Thank you so much.”

It does not take much time to hold a hand, to offer a comforting word, to snuggle a child. The world is in need of such good Samaritans. Let us be part of them.