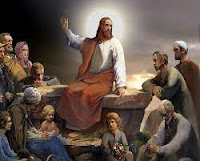 Strive to enter through the narrow door. These are the words of Jesus, occasioned by a question that was proposed to him in the following terms: "Lord, are there few that be saved?" Who it was that asked this question, or what his views therein were, we are not particularly informed.

Luke chooses to remind us today that Jesus is still on his way to Jerusalem. What awaits him in Jerusalem is the Cross. It is through the Cross that he would depart this world, and reach his Glorious state.

Unfortunately, many of us decide to look for alternative wider gates to get immediate but temporal solution instead of remaining at the narrow gate to wait for their turn to cross over to their victory.

All these gates promise us escape routes away from the Cross. That is the danger inherent in those adulterated gates. It is through the Cross that Jesus was glorified. Anyone who wants to enter into his kingdom to share his glory must be patient to

The Cross is anything that makes life difficult for us. The writer of the Letter to the Hebrews encourages us, in the Second Reading, to endure the pains from these crosses while patiently waiting for the Lord.

Without perseverance, we can stop on the way while those who were behind us come and overtake you.

John Bunyan’s Pilgrim's progress is a fictitious story, but it narrates how a man- a pilgrim, his name is Christian would leave his home town called the city of destruction to be on this journey towards the heavenly celestial city and in this progress, this journey, this pilgrimage is what Bunyan would call the ‘way of glory’.

The story begins with Christian, pictured as someone who carries a huge, ugly, heavy burden on his back. Then he pictures Christian reading a book and he begins to be very concerned. Indeed, very distressed and troubled, he begins to break down and cry, he's desperately searching for the way of escape.

But people all around him didn't believe him, people around him thought he had gone crazy. They laughed at him, mocked at him, but no one could tell him the way of escape. Until one day a man named Evangelist came into Christian's life. Evangelist found out what he was troubled about and told him that there is a way of escape, indeed for those who live in the city of destruction, and Evangelist, then said, pointing into the distance, “can you see that gate over there?” Christian says, “I can't.” “Then can you see the light over there?” Christian says, “I can.” And so Evangelist said, “follow that light and soon you will find that gate that leads you to the way of escape, that leads you to the place of deliverance.”

The rest of Pilgrim's progress part one then describes the long journey, Christian would make through the dangers and snares, through the trials and difficulties and tribulations, before he eventually arrives at the City of Heaven, the celestial city.

The hard way is marked by a narrow gate and very few people go in. It is filled with challenges and obstacles. Here to succeed we need perseverance. There are so many examples of people who have chosen the hard way and marked their position in history.

Abraham Lincoln is one of the most struggled person in the world. He failed numerous times before attaining the highest office in the land.

There are many who struggled and became famous as they chose the hard way of struggle instead of finding shortcuts.

A man found a cocoon of a butterfly.

One day a small opening appeared. He sat and watched the butterfly for several hours as it struggled to force its body through that little hole.

Until it suddenly stopped making any progress and looked like it was stuck.

So the man decided to help the butterfly. He took a pair of scissors and snipped off the remaining bit of the cocoon. The butterfly then emerged easily, although it had a swollen body and small, shriveled wings.

The man didn’t think anything of it and sat there waiting for the wings to enlarge to support the butterfly. But that didn’t happen. The butterfly spent the rest of its life unable to fly, crawling around with tiny wings and a swollen body.

Our struggles in life develop our strengths. Without struggles, we never grow and never get stronger, so it’s important for us to tackle challenges on our own, and not be relying on help from others. When we accept these challenges and grow we will be able to say with Robert Frost,

Two roads diverged in a wood, and I—

I took the one less traveled by

And that has made all the difference.