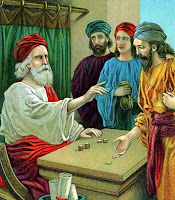 Today's First Reading from the Book of Amos speaks against greed. The Israelites were waiting impatiently for the end of the holy days and Sabbaths so that they could proceed with their dishonest practices. There were a couple of things that the Israelites were doing that was drawing the condemnation of the Lord God.

First of all, during their trading, the merchants used a dishonest ephah measure to cheat and oppress the poor. The second transgression of the Israelites was that they were "selling the righteous for silver, and the needy for a pair of sandals." The dishonest Israelites chose to serve the master of wealth, ignoring the righteousness of God.

Today's reading from the Gospel of Luke draws our attention to the parable of the dishonest manager. The parable concerns a rich man and a manager. In those days, as a general rule, the manager was a slave who had been born in the household. The rich man gave the slave great liberty and full responsibility regarding the management of his personal property. The parable tells us that the rich man had

discovered that his manager was wasting his goods.

Time reveals a person’s loyalty. Today we must apply much precaution to whom or to what we are loyal to. There are a number of stories of loyalty.

In 1924, Professor Hidesaburō Ueno took Hachikō, a golden-brown Akita, as a pet.

“Ueno would commute daily to work, and Hachikō would leave the house to greet him at the end of each day at the nearby Shibuya Station. The pair continued the daily routine until May 1925, when Ueno did not return. The professor had suffered a cerebral hemorrhage, while he was giving a lecture, and died without ever returning to the train station in which Hachikō would wait.

Then, each day, for the next 10 years, Hachikō awaited Ueno's return, appearing precisely when the train was due at the station.”

Loyalty is one of the most important traits a person can have in life. Alongside kindness, empathy, and strength, loyalty is one of the things that determine whether or not a person is worthy to be called a friend.  However, loyalty is underappreciated most of the time. When people are asked what qualities they want in a partner or friend the most common are usually – caring, kind, loving, appreciative, and the like. But if you really think about it, even a person with these traits, except loyalty, will become an unreliable partner during your time of need.

The importance of loyalty impacts us all – from our personal to our professional relationships. But what makes it so important? How does one even define what is true loyalty?

For one, loyalty teaches us about commitment. We say we are committed but when the chips are down, real loyalty is what makes us keep our word. Loyalty also teaches us how to be a better friend. Being a loyal friend means being there and providing support, especially in times of need. In order to keep a friendship alive, you must be willing to dedicate your time and effort to it.

Today’s reading emphasizes on the aspect of loyalty when Jesus says, “No man can serve two masters.” It is implied that nothing should be placed before God, be it money, or anything else. For it is human nature that does not allow us to have equal loyalty towards two things that are the complete opposites of each other. While living in this world, we might have mastered the art of diplomacy, however, we must remember that it is a worldly tactic that does not work on God.

When we render service to two masters, the tendency is that we may develop more affinity for one than the other. If we share our service to God Almighty and things of this world, we will miss fellowship with God.

St. Paul speaks of Demas who set his priority to follow this worldly ambitions: “For Demas hath forsaken me, having loved this present world, and is departed unto Thessalonica.”

In the days of Paul the Apostle, it was only one Demas that broke his heart, whereas, in our present time, we have uncountable Demas.

It is important that we set our priorities and declare our loyalty.