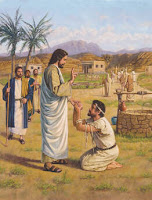 Today's First Reading [2 Kgs. 5:14-17] from the Second Book of Kings speak of the healing of Naaman, a foreigner in the land of Israel. Naaman, the commander of the army of the king of Aram, was a great man and in high favour with his master, because by him the Lord had given victory to Aram. The man, though a mighty warrior, suffered from leprosy." [2 Kgs. 5:1]

“Naaman went down and immersed himself seven times in the Jordan, according to the word of the man of God; his flesh

was restored like the flesh of a young boy, and he was clean." [2 Kgs. 5:14] Naaman was made well by his faith in the Word of God that was spoken through the great prophet Elisha.

Following this, Naaman returned to Elisha, acknowledging that there is no greater God on earth except in Israel. And then he offered Elisha a present in thanksgiving but Elisha would not accept anything.

During today's reading from the Gospel of Luke, [Lk. 17:11-19] we heard that Jesus healed ten lepers, nine being Jewish, the tenth being a Samaritan. It is interesting to note here that while the Jewish people normally did not mix with the Samaritans, misery so loves company that this group of lepers consisted of both Jews and a Samaritan. As we heard, out of those ten, the one who was a foreigner, was the only one who returned and thanked Jesus.

Gratitude is a rare virtue to be found.  Often we are ungrateful to God for the blessings that we have received from God. One of the great commandments is to give thanksgiving to God, for all He has done for us. In Psalm 100:4 we are taught to, "Enter into his gates with thanksgiving, and into his courts with praise: be thankful unto him, and bless his name." The first way to show true thanksgiving to God is to always remember Him. Remembering Him means that He is a part of our thoughts, words, and deeds. It is impossible to give gratitude to God if we never think or speak of Him. When we remember Him we are choosing to think, speak, and act as He would have us do. A good example of this is the servant girl of Naaman.  “On one of their raids in the land of Israel, the Arameans had taken a young girl captive. [2 Kgs. 5:2] This young girl served Naaman's wife. She told her mistress that if Naaman was with the prophet who is in Samaria, he would be cured of his leprosy. [2 Kgs. 5:3]

Secondly we have to show gratitude to our parents. There were years when we were literally dependent on our parents.  Yet the day often comes when the aged parents are neglected. As King Lear said in the days of his own tragedy:

“How sharper than a serpent’s tooth it is

To have a thankless child.”

Thirdly we are ungrateful to our fellow men.  We have received great help and consolation from our fellow men. "At times our own light goes out and is rekindled by a spark from another person. Each of us has cause to think with deep gratitude of those who have lighted the flame within us."  Says Albert Schweitzer. But we often take for granted that it is their duty to serve us, and conveniently forget our duty to express gratitude. While expressing his feelings about man’s ingratitude William Shakespeare wrote

“Blow, blow, thou winter wind
Thou art not so unkind
As man's ingratitude;
Thy tooth is not so keen,
Because thou art not seen,
Although thy breath be rude.”