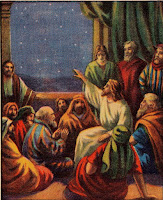 Jesus said to them, 'Nation will rise against nation, and kingdom against kingdom; there will be great earthquakes, and in various places famines and plagues; and there will be dreadful portents and great signs from heaven. But before all this occurs, they will arrest you and persecute you; they will hand you over to synagogues and prisons, and you will be brought before kings and governors because of my name. This will give you an opportunity to testify. So make up your minds not to prepare your defense in advance; for I will give you words and a wisdom that none of your opponents will be able to withstand or contradict.

You will be betrayed even by parents, by brothers and sisters, and by relatives and friends; and they will put some of you to

death. You will be hated by all because of my name. But not a hair of your head will perish. By your endurance you will gain your souls.'

There are numerous stories in the scriptures on endurance. The most popular story of endurance is the epic story of Job. His example was one of extreme pain and sorrow. Yet through it all, Job stayed true to God and his faith.

Job was a faithful man, blameless and upright. He served God and was a diligent follower. Satan wanted to prove a point to God, that he could break man’s will. So he asked if he could torture Job and God allowed it.

The only restriction God placed on Satan was he could not take Job’s life.

Job was told that all his possessions, livestock and ten children had been killed or destroyed. Despite all this, Job praised God.

Next Job was afflicted with terrible skin sores and yet, he persevered and praised God.

God then restored his health and all his possessions, granting him twice as much as he had previously, more children and a long prosperous life.

Job’s story is the ultimate test of faith and example of perseverance.

Jeremiah is another example of endurance by continually preaching and teaching God’s word, despite all that was done to him. Jeremiah faced threats, prison and much more to share his faith and God’s word.

The Endurance Expedition was a British mission to cross the Antarctic on foot. Launched in August 1914, the expedition became one of the most famous survival stories of all time after the expedition's ship, Endurance, became stranded and then sank during the voyage to the Antarctic. It was carrying 27 men and some animals. Their goal was to establish a base on Antarctica’s Weddell Sea coast. But they had to abandon the ship and they watched the ice swallowing it up completely. The men were left with no hope of survival. They battled monstrous swells and angry winds, baling water out of the boat and beating ice off the sails.  Finally on August 30, 1916, the saga of the Endurance and its crew came to an end.

Another inspiring story of Endurance is that of Henry Dempsey. On a flight from Portland to Boston in the summer of 1987, the pilot heard an unusual noise near the rear of the aircraft. Henry Dempsey turned the controls over to his copilot and went back to check it out. As he reached the tail section, the plane hit an air pocket, and Dempsey was tossed against the rear door. He quickly discovered the source of the mysterious noise. The rear door had not been properly latched prior to takeoff and it fell open. Dempsey was instantly sucked out of the jet.

The copilot, seeing the red light on the control panel that indicated an open door, radioed the nearest airport requesting permission to make an emergency landing. He reported that Dempsey had fallen out of the plane and requested that a helicopter be dispatched to search the area of the ocean.

After the plane had landed, the ground crew found Henry Dempsey holding onto the outdoor ladder of the aircraft. Somehow, he had caught the ladder and managed to hold on for 10 minutes as the plane flew 200mph at an altitude of 4,000 feet. What is more, as the plane made its approach and landed, Dempsey had kept his head from hitting the runway, a mere 12 inches away. According to news reports, it took several airport personnel more than a few minutes to pry the pilot's fingers from the ladder.

That is a picture of endurance - the ability to hang on when it would have been easier to let go. Many people are blessed with certain attributes, but endurance jumps to the forefront for success in any endeavor. Endurance is the key that keeps us from giving up and letting go.

As we stay the course and run the race, we need to remember those who have overcome the obstacles and turned tragedies into triumphs. The most glorious pages of human achievements are not about great scientists, artists, athletes, or war heroes, but about ordinary individuals who have endured unimaginable suffering and beat incredible odds. You do not find them in the halls of fame, but in the corridors of life.

Their resilience in the face of extraordinary adversity inspires the suffering masses. They teach us how to live with dignity and purpose, even when the world is in a horrible mess. These unsung heroes reflect the defiant human spirit and the highest virtues that transform them into spiritual beings, for they do not live by bread alone. You can find them in all walks of life.

There are many mothers, teachers, nurses, policemen, firemen, soldiers, counselors and social workers, who labor in trying circumstances and sacrifice their own lives for others.

Life is an endurance test. What really matters is not how smart we are, but how persistent. Often endurance is the key to success. The true spirit of endurance is to remain faithful and true to one’s calling and conscience to the point of death, in spite of mounting pressures to compromise. So Jesus has warned us, “You will be betrayed even by parents, by brothers and sisters, and by relatives and friends; and they will put some of you to death. You will be hated by all because of my name. But not a hair of your head will perish. By your endurance you will gain your souls.”

So don't quit. Never give up our values. Keep going. Hold on. God's rewards await us in the distant future not near the beginning; and we don't know how many steps it will take to reach the prize. No breaks or time outs exist; we must work every day of our life. It has been said, "Life is like reading a book. It begins to make sense when we near the end." Endurance maintains the stamina needed to see the end and embrace the prize. So fight another round, rise another time, and, above all, like Henry Dempsey, don't let go.