Cycle (A) Christ the King 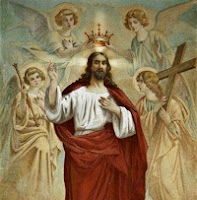 “Look on my works, ye Mighty, and despair!” With that, the poet demolishes our imaginary picture of the king, and interposes centuries of ruin between the mighty kings and us: All the works of the mighty kings sink into oblivion in the course of time.  All the mighty kingdoms had met with their inevitable destiny of disintegration. Some lasted for decades, some others for centuries and became a part of history. But there is only one kingdom that grows strengthens from decade to decade, from century to century and from millennia to millennia, conquering the hearts of millions; that is the Kingdom of Jesus, the king of the universe.

The Feast of Christ the King was established nearly 85 years ago by Pope Pius XI. After the First World War and the Bolshevik Revolution, the inhuman atrocities and untold misery, made people lose their hope and faith in the just world. Then, the Pope reasserted with the proclamation of the Feast of Christ the King, that in spite of wars and insurrections, Jesus remains the King of all history, all time, and all creation and of the entire universe. In 1969, Pope Paul VI gave the celebration a new title, and he assigned to it the highest rank, that of "Solemnity".

Alexander, Caesar, Akbar, Napoleon, all leaders in the world, even the greatest, died and left their followers to their lot, or to serve another ruler often less gifted and less kind than they had been. But there is only one king in the whole of history who had served his followers, and left them to serve him alone. The total number of Christians martyred in the early church is unknown. Even today, an average of 171,000 Christians worldwide give up their life to declare loyalty to their king. Approximately 2 billion Christians in the world today declare him to be their king. His kingdom is everlasting, because it is built on the everlasting principles.