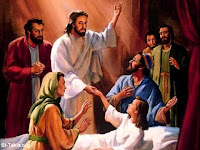 The operation — launched soon after Mahi fell into the bore-well on Wednesday night during her birthday celebrations and was prolonged by almost 85 hours as the rescue team  pulled her out.

The efforts to save Mahi were televised live by National News Channels with people across the country performing religious rituals and offering prayers for her survival. Hundreds of soldiers, engineers and medical experts were involved in the attempt to rescue her. The rescue operations had kept the people nationwide glued to their TV sets.

Today's Gospel passage presents before us a similar situation. The daughter of Jairus, one of the rulers of the synagogue fell ill.

It is always tragic when a child is ill or falls into danger. When Mahi fell into the bore well, teams from the Army, Police, National Security Guards, Gurgaon civic authorities, Gurgaon Metro Rail were involved in the rescue operations. And the whole nation was praying for her. Every one of the operation team was ready to make any sacrifice to save her. In the case of Jairus, daughter, too, we see an anxious crowd in his house. Jairus was ready to do anything to save his daughter.

The way Jairus stood before Jesus is a great example for the Christians of time. He tells us how we should approach Jesus.

First of all, his prejudices were forgotten. There can be no doubt that he might have regarded Jesus as an outsider and as a dangerous heretic. But he was big enough to abandon his prejudices in his hour of need. "Prejudice cannot see the things that are because it is always looking for things that aren't” When Jairus shed his prejudice, he was able to see What Jesus was able to do for him. He realized none but only Jesus could help him.

At the heart of prejudice lies two concepts: ignorance and fear. All of us tend to have prejudicial attitudes towards others. This type of prejudice or "pre-judgment" is based on ignorance. In light of such a common human condition, the advice of a former seminary professor is most helpful and worthy of practice: "The mark of a mature mind is the ability to suspend judgment until all the evidence is in." The other factor is fear, and this one goes much deeper than ignorance, for its strikes at the root of prejudice. When Jairus shed all his prejudice he was able to see clearly the power of Jesus. "A prejudiced mind shuts out a man from many a blessing." Therefore, when we are in the presence of Jesus, let us keep away all our prejudices, and be open to the plan of Jesus for us.

Secondly, Jairus' dignity was forgotten. Jairus, the ruler of the synagogue, falls at the feet of the wandering teacher. We all feel great that we are the CEO, CFO, Manager of Operations, Finance Manager and so on. But all these titles are like bubbles. They can burst at any time. Yet, these put on titles keep us away from God and his plans. Jairus teaches us that to experience Jesus, all these titles are to be shed.

There is a famous story of Diogenes. He was captured by pirates and was being sold as a slave. As he gazed at the bystanders who were bidding for him, he looked at a man. "Sell me to this man," he said, "He needs a master." The man bought him; handed over the management of his household and the education of his children to him. "It was a good day for me when Diogenes entered my house," he used to say. But this type of recognition requires an abrogation of dignity. It often happens that a man stands of his dignity and falls from grace.

Thirdly, his pride was forgotten.  Pride goes before a fall. Douglas MacArthur is a good example of this he was the master mind behind the Inchon landing in the Korean War. He did this when everyone else believed that it was not possible. Then he pushed the army north. He did not believe China would come into the conflict. He would not listen to any other advice because he had been right at Inchon and as a result 1000's of men needlessly died.

The ancient Greeks had a term for overweening pride: hubris. The great Greek playwright Aeschylus in his masterful play Agamemnon wrote about how the gods seek to destroy men who put themselves above other men. Those great kings whose heads rise too high and who "count their kills by company" must fear the "lightning" of the gods that will bring them down.

The Western religions also know about the dangers of pride. The Pharaoh Ramses was filled with pride, and the lowly Moses channelling God's awesome power brought him and his nation down. Adam and Eve had been tempted by the snake with the concept that if they ate of the fruit from the Tree of the Knowledge of Good and Evil they "would be like gods," and so they ate and brought all manner of horror into the world, including the crusher of all human pride: death itself.

Satan, the great causer of evil, had originally been the most beautiful of God's angels, called Lucifer, the angel of light. But his sense of exalted self, as expressed by the poet Milton in Paradise Lost, was a prideful preference to "reign in hell than serve in heaven." Hence the most beautiful of all creations became the most despised, feared and ugly of beings: the devil himself.

Jairus was a man who forgot everything except that he wanted the help of Jesus. This was the attitude of the woman who was suffering from a haemorrhage. This is the attitude that Jesus demands from us when we stand before him.