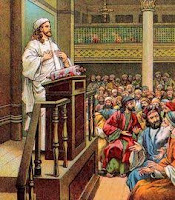 Today’s readings introduce Jesus as a prophet and explain how prophets and other messengers from God inevitably suffer rejection. Most of the famous men have experienced rejection not once, but many times. Colonel Sanders is the founder of KFC. He started his dream at 65 years old! He got a social security check for only $105 and was mad. Instead of complaining he did something about it. He thought restaurant owners would love his fried chicken recipe, use it, sales would increase, and he’d get a percentage of it. He drove around the country knocking on doors, sleeping in his car, wearing his white suit. Do you know how many times people said “no” till he got one yes? 1009 times!

Walt Disney was the man who gave us Disney World and Mickey Mouse. His first animation company went bankrupt. He was fired by a news editor because he lacked imagination. Legend has it he was turned down 302 times before he got financing for creating Disney World.

Vincent Van Gogh sold only one painting in his lifetime! Just one to a friend. Despite that he kept painting and finished over 800 pieces. Now everyone

wants to buy them and his most expensive painting is valued at $142.7 million.

J K Rowling went from being unemployed to creating one of the world’s most popular characters in fiction. Her book “Harry Potter and the Philosopher’s Stone Potter” was rejected by 12 publishers before being published. The “Harry Potter” series has since been credited with getting children back into reading.

Today's gospel passage shows how some people of Jesus' home town, Nazareth, did not accept him as a prophet because they knew him and his family. They knew that he was a carpenter with no schooling in Mosaic Law and “knew” that he could not be the promised Messiah who would come from Bethlehem as a descendant of David’s royal family. Besides, they were angry when Jesus did not work any miracles in Nazareth but, with prophetic courage, he accused them of lack of faith, and warned that he would bring other people his preaching and healing ministry.

Throughout the life of Jesus there were two diametrically opposing views towards Jesus. The Infant Jesus was joyfully accepted by the shepherds. But, the infant was rejected by Herod, and he sought ways to annihilate him. The wise men from the East recognized and accepted him; but the wise men of his society – the scribes and Pharisees rejected him. Many simple people from all over Galilee and neighbouring places flocked around him; but his co-villages rejected him. Sinful people like Zachhaeus, Mary Magdalene, the Samaritan woman etc. accepted him; but he was rejected by priests and religious leaders who were supposed to be holy.

When Jesus came to Nazareth he put himself to a very severe test. He was coming to his home town; and there are no severer critics of any man than those who have known him since his boyhood. He went into the synagogue and taught. His teaching was greeted not with wonder but with a kind of contempt. They were scandalized that a man who came from among them did such things.

Even today, history testifies that home towns find difficult to accept the greatness of its own sons. Harry S. Truman was born into a farming family in Missouri. After high school, Truman was employed in a few odd jobs before returning to labour on the family farm. College was not in the cards for Harry; he couldn’t afford to attend any school except West Point, and they turned him down. Yet, Harry was determined to make the best of his circumstances. When he ran for re-election in 1948, Truman was, as he had been in his senatorial campaigns, the true underdog. He had to fight fiercely just to secure the nomination He had spent his whole life giving his naysayers hell. Truman was the only president to serve after 1897 who did not hold a college degree.

The people of Nazareth despised Jesus because they knew his family. Every person that comes into the world is confronted with a choice: to accept or Reject Jesus. Fortunately we have accepted Jesus as our Saviour.  It is not enough to have accepted Jesus once; we must renew our acceptance day after day. Our acceptance demands that we must always be attentive to discover what God wants from us:  ne manifests his will in prayer, through His Word in the Scriptures, though the people we meet and through every event in our live, and in nature. The obstacles that prevent from accepting Jesus are the same that prevented people of Nazareth from accepting him – they are   “pride” and “ego”. Hence, it is important that we overcome our pride and ego, then we will gain the courage to accept Jesus.