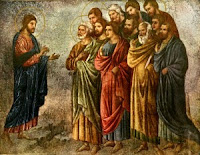 Today's gospel, tells the story of Jesus' commissioning of the twelve apostles to preach the "good news". Jesus gave clear instructions to his disciples for their first mission. They should be walking illustrations of God's love and providence in action. They were instructed by Jesus not to take any supplies for the road, but must trust God for everything.

It was a Rabbinic law that when a man entered the Temple courts he must put off his staff and shoes and money girdle. In short all ordinary things were to be set aside on entering the sacred place. He wanted his disciples to consider the simple homes they enter as sacred as the Temple courts.

Hospitality was a sacred duty in the East. When a stranger entered a village, it was not his duty to search for hospitality; but it was the duty of the village to offer it.  Jesus told his disciples if hospitality was denied they must shake off the dust of that place

from their feet when they left. The mark of Christian disciple is not be utter simplicity, complete trust, and the generosity which is always to give and never to demand. Accepting the mission the disciples travelled all over.

To the people they brought the king's message. The king's message was "Repent". To repent means to change one's mind and then to fit one's actions to this change. There is a beautiful scene in the novel Quo Vadis. Vincius the young Roman fell in love with a girl who was a Christian. Because he was not a Christian she would have nothing to do with him. He followed her to the secret night gathering of the little group of Christians, and there unknown to an one he listens to the service. He heard Peter preach. As he listened something happened to him. He felt that if he wished to follow that teaching, he would have to place on a burning pile all this thoughts, habits and character; burn them into ashes and then fill himself with a life altogether different and an entirely new soul. That is repentance. The change is not necessarily from robbery, theft, murder, adultery and such glaring sins. Such changes are comparatively easy. But the change most often required is from a life that is completely selfish, instinctively demanding, totally inconsiderate, and egocentric. A change from self-centred life to God centred life.

Repentance always involves some change in values, and a willingness to leave behind values and attitudes that may be inconsistent with living in a relationship with God. There are also times when restitution may be necessary.  Festo Kivengere (former Anglican Archbishop of Kigezi, Uganda, and leader of the African Enterprise evangelistic team, in Decision magazine.) Told a story about his uncle. He said, "My uncle, the chief, was sitting in court one day with his courtiers around him when a man came and bowed in the African way. He was rich in cattle and was well known as a man who sought God through the spirits of dead relatives. He had come with eight cows which he left some twenty yards away.

'I have come for a purpose, sir,' the man said.

'What are those cows for?' asked the chief.

'What do you mean they are mine?'

'They are yours. When I was looking after your cattle, I stole four and now they are eight, and I am bringing them.'

'Jesus arrested me, sir, and here are your cows.'

There was no laughter, only a shocked silence. My uncle could see this man was at peace with himself and rejoicing.

'You can put me in prison or beat me up,' the man said, 'but I am liberated. Jesus came my way and I am a free human being.'

'Well, if God has done that for you, who am I to put you in prison? You go home.'

A few days later, having heard the news, I went to see my uncle. I said to him, 'Uncle, I hear you got eight free cows!'

'You must be happy.'

'Forget it! Since that man came, I can't sleep. If I want the peace he has, I would have to return a hundred cows!'"

Repentance implies a change from the undesirable habits. Abstinence alone isn't enough to hold us when it comes to dropping an old habit. We need to find a new focus that's more enticing, more compelling than the old habit, to shift interest and energy to a new way of living.

Secondly, the Apostles brought to the people the king's mercy. Not only did they bring their shattering demand upon men; they brought help and healing. Jesus tried to lift his people not only from moral wreckage, but also from physical pain and suffering. This remains the task of the church today.

Finally, the passages tell us that preachers of the Gospel must be listened to because they are God's messengers. It is immaterial where God's messenger comes from: what matters is that it is God who sends them. So, no other consideration should prevent us from accepting their message.

Remember the words of Jesus to his disciples:

"Anyone who welcomes you welcomes me:

And those who welcome me