Cycle [C] Ascension of the Lord 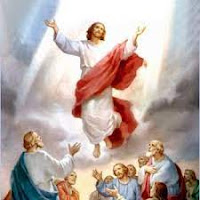 Today we celebrate the "Ascension of the Lord" Jesus. The visible departure of the Lord concluded the Risen Jesus' sojourn on earth. For 40 days after His Resurrection, Jesus had been appearing to many of His followers and spoke to them about the Kingdom of God.

The Ascension marks the beginning of a new phase in Christ’s relationship to humanity. His "spiritual presence” begins in the Church.

Jesus is alive and will live through us if only we become available. A preacher used to keepa pair of old leather gloves on his desk. Before he would go to preach he wouldput the old gloves

on and flex it several times. Someone asked him, “why do you do that?” He said, “To remind me of this vital lesson, that the gloves are absolutely impotent and powerless until my hands slipped into it.”

Malcolm Muggeridge asked Mother Teresa if she thought working with the poor was the way to find God, she replied: "Because we cannot see Christ [in the flesh], we cannot express our love to him; but our neighbors we can always see, and we can do to them what, if we saw him, we would like to do to Christ in the slums, in the broken human body, in children, we see Christ, and we touch him."

There are ways that God may be working through us, like when we find us in a spot where we really need help, someone comes to us and surprises us.

Airports can be stressful, and they’re made even more so when something unexpected happens—unless you find an angel on Earth, like one father did. After trying to check in for an upcoming flight with his daughter, the man was told that his 2-year-old daughter would need her own ticket. He mistakenly thought she was free because of her age. The father was obviously distraught, saying he didn’t have the money, and left the counter to make some phone calls. That’s when a stranger stepped in, approaching the counter to tell the agent she wanted to pay for the little girl’s ticket—all $749 of it. The appreciative man asked for the woman’s name so he could repay her, but she insisted on remaining anonymous. When we reflect we see many similar examples.

God works in us through the Word, prayer, and suffering

The Bible shows many examples. God spent 40 years working in Moses before He could work through him. At the beginning of his ministry, Moses was impetuous and depended on his own strength. He killed an Egyptian and had to flee Egypt, hardly a successful way to start a ministry. But during those 40 years as a humble shepherd in the desert, Moses experienced God’s working in his life, a working that prepared him for forty more years of magnificent service.

There are other examples. Joseph suffered for thirteen years before God put him on the throne of Egypt, second to Pharaoh. David was anointed king when he was a youth, but he did not gain the throne until he had suffered many years as an exile. Even the Apostle Paul spent three years in Arabia after his conversion, no doubt experiencing God’s deeper work to prepare him for his ministry. God has to work in us before He can work through us; and this leads to the fourth work in our passage.

"The Gate of the Year" is the popular name given to a poem by Minnie Louise Haskins. The title given to it by the author was "God Knows".

And I said to the man who stood at the gate of the year:
“Give me a light that I may tread safely into the unknown.”
And he replied:
“Go out into the darkness and put your hand into the Hand of God.
That shall be to you better than light and safer than a known way.”
So I went forth, and finding the Hand of God, trod gladly into the night.
And He led me towards the hills and the breaking of day in the lone East.

Let us be ready to submit ourselves in the hands of God and he will work through us.