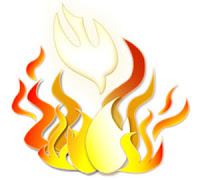 Today we are celebrating the Feast of Pentecost. The word "Pentecost" means the "fiftieth day" after Easter. The Church was made manifest to the world on the day of Pentecost by the outpouring of the Holy Spirit.

Today's First Reading from the Acts of the Apostles gives an account of the glorious arrival of the Holy Spirit.   “Then suddenly from heaven there came a sound like the rush of a violent wind, and it filled the entire house where they were sitting. [Acts 2:2] "Divided tongues, as of fire, appeared among them, and a tongue rested on each of them. All of them were filled with the Holy Spirit and began to speak in other languages, as the Spirit gave them ability." [Acts 3:4-5]

The denial of Peter, the ambition of the apostles, the fear that hovered over them and all their spiritual miseries were wiped away the moment the Holy Spirit took possessions of their hearts. The Holy Spirit bestowed on them its gifts and the Apostles were filled with the gifts of the Spirit.

The seven gifts of the Holy Spirit are wisdom, understanding, counsel, fortitude, knowledge, piety, and fear of the Lord.

Isaiah teaches that followers of Christ will enjoy wisdom, which is the ability to discern right from wrong and to seek justice. Wisdom is the ability to use good judgment, and is grounded in life experience, reflection and integrating life's hard lessons.

Understanding is the gift of discernment and insight. It helps followers to correctly perceive situations. Understanding can be practiced through learning their faith, and praying for, and carrying out God's purpose in life.

Counsel refers to the ability to both give and receive good advice, to guide and be guided by others, to encourage and be encouraged.

Knowledge refers to being able to educate oneself and build up a base of information from which to operate in the world. The Bible encourages followers to employ knowledge for the good of all humanity.

Piety is another word for devotion and is the demonstration of commitment to faith. A pious person is one who lives a sin-free, moral life, and who surrenders his own will to that of God.

A certain degree of fear of God will help followers lead a moral life. Fear can also be interchanged with awe or reverence, which encourage followers to pay devotion to God.

Jesus has given to his Church the power to forgive sins. This was the most important message that Jesus gave during his life. The Prodigal Son is probably the most well known Bible parable about forgiveness. Jesus forgave the woman caught in adultery. Jesus taught Peter to forgive seventy-seven times. Jesus told the parable of the unforgiving servant and the consequences he had to face. Jesus forgave and prayed for the people who hurt him.

There are many inspiring incidents of forgiveness. An Iranian mother Samereh Alinejad, along with hundreds of people, had gathered near the prison in a northern Iranian town to see the execution of Balal, who murdered her son in a street feud in 2007 when he was only 18.

Just moments before the execution, the mother went towards Balal and slapped him across the face as she burst into tears. It was like all the rage in her heart vanished and she asked to remove the noose around his neck. She spared the life of her son’s murderer. Balal was declared pardoned.

In 1942 the U.S. was hit by a Japanese pilot, Nobuo Fujita, who dropped incendiary bombs on an Oregon state forest. The mission was to start massive forest fires, but the plan didn’t work due to the damp conditions.

The firefighters managed to contain the fire and the pilot returned home. Ashamed of his actions during the war, Fujita came back to the town he once tried to raze, to make amends. To his surprise, the people of the town welcomed him with a grand reception and a key to the city.

The people of Oregon, in a remarkable act of generosity and forgiveness, made Fujita an honorary citizen shortly before his death.

Forgiveness is a great element of Christianity. Praying the Angelus on the Feast of Saint Stephen, Pope Francis said the first Christian martyr teaches us to trust in God and always to forgive others.Stephen, the Pope said, also imitated Jesus with an attitude of forgiveness, praying for his persecutors.

“We are called to learn from his example to forgive, to forgive always.”

Stephen’s example is a way to live our relationships with other people: in the family, at school or work, and in parish life. “The logic of forgiveness and mercy always prevails and opens up horizons of hope.”

On 13 May 1981, in St. Peter's Square in Vatican City, Pope John Paul II was shot and wounded by Mehmet Ali Ağca while he was entering the square. Four days after being shot, he offered forgiveness to his would-be assassin from his hospital bed.

We are also called to imitate these noble examples.  If are able to follow their foot steps and are ready to forgive the little things at home, in the parish and in our society the world will change.

Once we are ready to do it, we too will be filled with the fruit of the Spirit - love, joy, peace, patience, kindness, generosity, faithfulness, gentleness and self-control.

This is the message of Pentecost. Accept it.