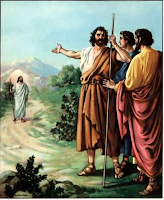 There are many signs in nature that foreshadow the natural events. When the Scarlet Pimpernel opens people know that the weather will be sunny; when it closes tightly rain is expected. So, this flower has been called the "poor man’s weather glass". When the petals of the Morning Glory open it indicates fine weather, and the shut petals predict rain and bad weather.

Dust storms are common in desert areas. When strong winds pick up large amounts of loose sand, and travel on the horizon looking like a solid wall of debris and dust the desert dwellers know that there is an impending dust storm. When there is large thunderhead clouds and wind picks up, people expect a thunderstorm.

There was a great turmoil in the desert of Jordan raised by a man who lived there, John the Baptist.  In the Jordanian desert very few plants grow. Very few animals live there. It has bad soil. The soil has chalk in it. Stones and rocks cover the ground. Still, multitudes of people crossed it. They went to see the new prophet, John the Baptist, who began his work suddenly. There had been many prophets since Moses. The Jews knew this. But after the time of Malachi, no prophet had

spoken for 400 years. People wanted very much to hear from God. So, People began to talk about him. John wore simple clothes. He ate ‘wild honey and locusts’. He lived a very simple life. He did not have a home. He did not have any possession. He shouted out his message (Matthew 3:2), and his message raised a storm of conversion.

Sending envoys to prepare the way for the arrival of a king or a dignitary is not unknown to us. That practice is as old as the establishment of the monarchy. There is nothing unusual in that. So, when the “King of kings” and the “Lord of lords” came into the world, He sent an envoy to prepare a way for Him: John the Baptist. However, the kind of envoy that was sent was as different and unusual as the kind of King he was supposed to announce.

God already had prepared the way for this envoy some 800 years ago when the prophet Isaiah made this announcement about his coming:

A voice is calling, “Clear the way for the Lord in the wilderness; make smooth in the desert a highway for our God. Let every valley be lifted up and every mountain and hill be made low; and let the rough ground become a plain, and the rugged terrain a broad valley; then the glory of the Lord will be revealed, and all the flesh will see it together; for the mouth of the Lord has spoken” (Isaiah 40:3-5).

A few hundred years later came the prophet Malachi, who made a similar announcement:

“Behold, I am going to send My messenger, and he will clear the way before Me. And the Lord, whom you seek, will suddenly come to His temple; and the messenger of the covenant, in whom you delight, behold He is coming,” says the Lord of hosts (Malachi 3:1).

Mathew describes the storm raised by John. “Jerusalem was going out to him, and all Judea, and all the districts around the Jordan; and they were being baptized by him in the Jordan River, as they confessed their sins” (Matthew 3:5-6).

The message of John the Baptist was essentially– prepare and repent.

As a dramatic sign of the inner change that John was demanding, he offered the outward sign of baptism, plunging a person desirous of a new life into the deep waters of the River Jordan. It was the first time in Jewish History that the Jews received Baptism.

John’s fearless denouncement of evil, and summon for righteousness prepared the way for Jesus to make His entry. Then, John pointed beyond himself. John was not only a light to illuminate evil, a voice to rebuke sin, but he was also a sign post to God. It was not himself he wished men to see, he wished to prepare them for Jesus. John said of Jesus, “He who comes after me was before me. He is the one who is going to baptise with the Holy Spirit.”

When the Spirit takes possession of a man a transformation takes place. First of all, his life will be illumined. There comes to him the knowledge of God and God’s will. He knows what God’s purpose is. He knows what life means. He knows where duty lies. God’s wisdom and light comes to him. The first parents were tempted with this light, “When you eat of it, you will be like God knowing good and evil.”(Gen 3:4).

Ten 20th century Christian martyrs from across the world are depicted in statues above the Great West Door of Westminster Abbey in London. They were Unveiled in 1998 by Her Majesty, The Queen of UK.

Esther John stands in the centre of these statues, with the following inscription.

"Leave all other ties, Jesus is calling."

Esther John was born in Qamar Zia, India, on 14 October 1929, one of seven children. As a child she attended a government school and, after the age of seventeen, a Christian school. There she was profoundly moved by the transparent faith of one of her teachers, and she began to read the Bible earnestly. She was suddenly overtaken by a sense of conversion to this new religion.

Her Christian faith grew privately, even secretly. Then, seven years later, she ran away from home, fearful of the prospect of marriage to a non-Christian husband. In April 1959 she completed her studies there and moved to Chichawatni. She evangelized in the villages, travelling from one to the other by bicycle, teaching women to read and working with them in the cotton fields. On 2 February 1960 Esther John was brutally murdered. Her body was taken to the Christian cemetery at Sahiwal and buried. Later, a memorial chapel was built in front of the nurse's home in the grounds of the hospital there. Today, Esther John is remembered with devotion by the Christian community with whom she lived and worked.

21 centuries ago John pointed out Jesus to the world. In the last century, when the Spirit had taken possession of Esther John, she was able to point out Jesus to our world.

Secondly, when the Spirit takes possession of a man, his life will be strengthened. Knowledge without power is a haunting and frustrating thing. But the Spirit gives us not only knowledge to the right but also strength and power to do so. The early Christian community experienced it. So, when their faith was challenged, and their life was threatened, the Spirit strengthened them. Hence, many of them courageously embraced death. So did, Esther John, in the last century.

Thirdly, when the Spirit takes possession of a man, his life will be purified. Jesus’ baptism with the Spirit was to be a baptism of fire. All the evil in life will be burned away until we become clean and pure. Hence, the apostles were able to challenge their enemies, when they were presented before the rulers to be condemned, guilty.

The Church, today, admonishes us to allow the Spirit to illumine, strengthen and purify our lives.