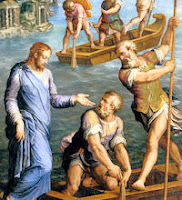 In the first reading, Isaiah pumps up our hope of his people. This hope stems from the fact that the Lord God Himself chose to be our light. It is a message of deliverance from the power of darkness that formerly enveloped and harassed us. Isaiah declared: “The people that lived in darkness have seen a great light; on those who live in the land of deep shadow a light has shown.”

In the gospel, the prophecy of Isaiah was fulfilled through the action of Christ. His presence made a great difference in the life of the people of Capernaum as well as those of neighboring towns of Zebulun and Naphtali. He brought light into their hearts and region. His light was strongly felt because it brought healing and deliverance. Many came to hear the message of Jesus, "Repent, for the kingdom of heaven has come near." [Mt. 4:17] They followed Jesus wherever He went. When Jesus preached, they sat and listened carefully to every word that He said.

The Gospel also gives the account of Jesus calling his first disciples. “As he walked by the Sea of Galilee, he saw two brothers, Simon, who is called Peter, and Andrew his brother, casting a net into the sea, for they were fishermen. And he

said to them, "Follow me, and I will make you fishers of people." Immediately they left their nets and followed him.

As he went from there, he saw two other brothers, James son of Zebedee and his brother John, in the boat with their father Zebedee, mending their nets, and he called them. Immediately they left the boat and their father, and followed him”.

When Jesus called his first disciples, the Gospel tells us that the fishermen (Peter and Andrew, James and John) dropped everything to follow Jesus immediately. These fishermen did not procrastinate, but saw the urgency of His message. They followed Him with instinctive alacrity.

A few years ago, when rock climbers Tommy Caldwell and Kevin Jorgenson began planning to scale Yosemite’s El Capitan, people said it couldn’t be done. Caldwell and Jorgenson proposed climbing the sheer wall, or Dawn Wall, using nothing but their own skill and strength. Ropes would be there to catch them, but that was it. It would take days to climb the 3,000-foot rock face—and again and again, they were told it was impossible.

Tommy Caldwell and Kevin Jorgenson did the impossible. In 19 days, they made the first “free climb” of the Dawn Wall—using only their hands and feet to reach the summit.

People must have thought they were crazy.

The same could be said of the men we encounter in today’s gospel: people must have thought they were crazy—or maybe just stupid.

An itinerant preacher passes by on the seashore, and these fishermen drop everything to follow him. They abandon their income, their security, their families and they set out to follow Him. They left what they knew and went into what they didn’t know, to live differently.

The Church has many  Saints and martyrs, because they chose to be crazy and accept the call of Jesus.

The Great Martyr Saint Catherine found God after experiencing a vision. Under the tyranny of Gaius Valerius Galerius Maximinus, Christians were tortured and killed. Catherine debated many regarding faith and subsequently helped convert many others to the Christian faith. Maximinus ordered her death on the wheel but it broke. She was then beheaded. Andrew was a follower and disciple of John. He went on to preach and plant churches causing Greek authorities to worry about his influence. The governor stepped in to stop Andrew from swaying people away from the Roman Gods. Andrew responded “I would not preach the honor and glory of the cross if I feared the death of the cross.”

It is a call to sacrifice, to surrender, to trust, to change.

It is a call to do what others might consider crazy—but what we know in our hearts is the best choice of all.